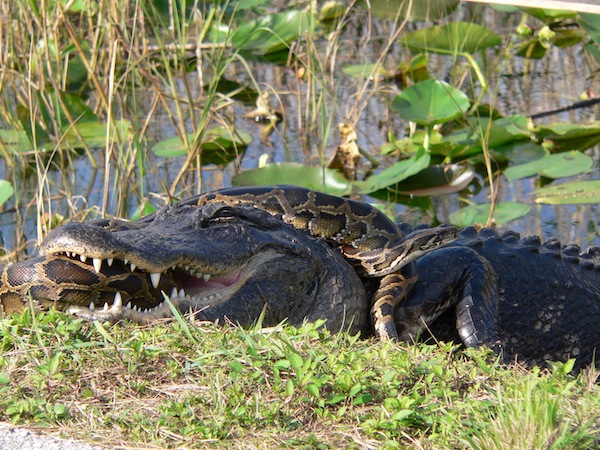 This is the ninth installment of 12 Things to Experience on an Everglades Airboat Tour which can also be downloaded as a free eBook.

You may have read or heard a news story over the past few years about the presence of pythons or anacondas in the Everglades. Although neither of these snakes are native to Florida, there have been sightings of them in the Eastern portion of the Everglades. Why is this?

The presence of these snakes is an unnatural phenomenon, due to pet snakes that have escaped or have been released into the Everglades when the pet owner decided the snake was either too large to handle or they no longer wanted them. However, once these snakes are in the Everglades, because it is a conducive environment for them, they will likely continue to live, grow, and reproduce.

Releasing pet snakes or other non-native animals into the Everglades is strictly forbidden, as it upsets the natural balance of the native plants and animals.

Because we are on the western portion of the Everglades, we do not see Pythons or Anacondas. However, the East Coast does have a population of these snakes, which are suspected to come from places such as Miami or neighboring cities.

Although they are primarily on the East side, these snakes have been seen as far west as Naples. With few natural predators the number of pythons has grown over the years. Even so, they are rarely seen on the Western side of the Everglades.

Getting excited to take a tour of the Everglades yet? Grab your camera and a $10 discount coupon and come to Captain Jack’s! Our airboat tours depart continuously – about every 30 minutes and every day of the year including Thanksgiving and Christmas. If you have further questions about us or if you are ready to book your trip contact us online, call us toll free at 1-800-282-9194, or follow Captain Jack’s on Twitter.